Think of Johnny Cash and any number of images will spring to mind, not the least of which is his relationship with his wife of 35 years, June Carter Cash. While their love story has been elevated to epic status thanks to a number of media portrayals, like 2005’s Walk the Line, Cash’s marriage to his first wife Vivian Liberto has been a blind spot.

My Darling Vivian, a thoroughly engrossing, often heartbreaking documentary directed by Nashville filmmaker Matt Riddlehoover and produced by Riddlehoover and Dustin Tittle, aims to change that. The film looks at the promising beginnings and turbulent end of Liberto’s romance and family life with Cash via intimate, never-before-seen footage, photographs, and a wealth of personal letters the two wrote to each other while Cash served in the military. Featuring the candid memories of the couple’s four daughters — Rosanne Cash, Kathy Cash Tittle, Cindy Cash, and Tara Cash Schwoebel — the film is their love note to the enigmatic woman whom Rosanne says “faded into negative obscurity” after her 13-year marriage to Cash ended in divorce.

My Darling Vivian is currently streaming for free on Amazon Prime Video as part of the SXSW 2020 Film Festival Collection of features, shorts, and documentaries that were originally slated to debut at the canceled event. Here are six things we learned from the documentary about Liberto and her important place in Cash history.

Vivian Liberto’s fateful first encounter with Johnny Cash remains a source of debate among their daughters.
In the summer of 1951, 18-year-old Cash was an Air Force trainee stationed in San Antonio, Texas, when he first met Liberto at a local roller rink. But the stories Cash told his daughters about how the pair actually first met vary, with Cash either winning a bet with friends that he would walk Vivian home that night (the version he told Rosanne), or deliberately knocking her down while skating so he could meet her (the version his younger daughters were told). Whichever version is true, for the next three weeks they dated until Cash shipped off to Germany. The Cash daughters have more than 1,000 letters the couple wrote to each other, and Vivian kept a detailed diary of every time she sent or received a letter. One of those letters to Vivian included a surprise: an engagement ring.

Cash’s family and his recording career both began just one month apart.
After Cash returned home from Germany on July 4th, 1954, he and Liberto wed on August 7th. They honeymooned in Memphis, and then moved there. Rosanne Cash was born nine months after they married and Cash released his first single on Sun Records a month later. Johnny would soon be on the road, leaving Vivian at home for long stretches at a time. As Cash’s career flourished, the couple moved to Encino, California, in 1958, when he began getting movie offers, including the starring role in 1961’s Five Minutes to Live, later re-titled Door-to-Door Maniac. The family, which now included daughters Kathy and Cindy, lived in a house they purchased from future Tonight Show host Johnny Carson. Rosanne notes that throughout her life she often heard the story that Carson’s wife left a pie in the oven for Vivian.

As the oldest child, Rosanne says she often bore the brunt of the fallout from her parents’ crumbling marriage.
On the rare occasions when Johnny was home, the Cashes would host barbecues and parties at their home in a remote spot overlooking Casitas Springs, California — Tex Ritter, Patsy Cline, and June Carter all attended. But between her father’s escalating drug habit and her mother’s depression and sometimes violent outbursts, Rosanne experienced an air of chaos, recalling that she walked around with a knot in her stomach every day, wondering if her mother was going to kill herself. “I’m not saying this out of self-pity,” she says. “I’m saying it looking back from decades on and going, ‘That was fucked up. That’s not how children should be raised.’”

After Cash’s 1965 drug arrest in El Paso, a newspaper photo in which Vivian appeared beside her husband led to a widely circulated rumor that she was African-American.
The appearance of an interracial marriage was a damaging accusation in the South and several Cash concerts were canceled, with hate groups targeting the couple and causing continued fear for the family. Friends mounted a letter-writing effort to clear up the misinformation and vouch for the character of both Johnny and Vivian. Shortly after the furor died down, Vivian filed for divorce hoping that Johnny would return home more frequently. Instead, he let the divorce go through, moving into an apartment north of Nashville with Waylon Jennings. While Vivian and the daughters remained in California, Johnny moved out of the apartment, so his kids could visit, and into the lakefront house in Hendersonville, Tennessee, where he would reside for the remainder of his life. 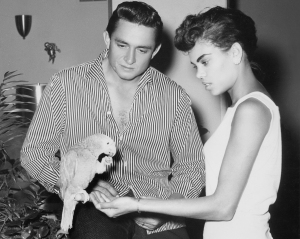 Vivian’s divorce caused friction with both her family and the Catholic Church, prompting Johnny to intervene to help restore his ex-wife’s reputation.
Vivian’s Italian father was a strict disciplinarian who disapproved of her divorce, while the Catholic Church even excommunicated Vivian because of it, forbidding her from taking communion. Only when Johnny wrote a letter to the archdiocese, the church’s governing body, taking full responsibility for the couple’s split and acknowledging his failings as a husband and father, was Vivian allowed to receive communion again. Vivian and her daughters moved into a new house and she met police officer Dick Distin, who was married when they began dating. Shortly after his divorce, the couple married.

After June’s death, Vivian visited Johnny in Tennessee.
Rosanne recalls an early backstage incident at her father’s concert at the Hollywood Bowl in the early Sixties, when June, who was touring with Johnny at the time, made what was perceived as an insulting remark to Vivian. To make matters worse, after she and Johnny were married, June would say in TV interviews that she was raising her seven children (three of her own from her three marriages, and Cash’s daughters with Vivian). Cindy Cash also says she discovered a letter Vivian wrote but never sent to Johnny asking him to tell June to stop referring to their daughters as “her children.” Two months after June died in May 2003, Vivian arrived in Tennessee to visit Johnny, who was in a wheelchair by that time, to tell him about the memoir she wanted to publish. Johnny reportedly told Vivian that “Of all the people on the planet that should tell their story, I think it should be you.” Two months later, Johnny Cash died at age 71. Vivian, who had battled lung cancer, died as the result of a surgical error on May 24th, her daughter Rosanne’s 50th birthday. Rosanne recalls witnessing her mother as she left her body, becoming a young girl again. Vivian’s memoir, I Walked the Line, was published in 2007.

Taylor Swift called out Netflix and its new show Ginny & Georgia for a “deeply...

A lawyer representing nearly a dozen people is calling for a sexual abuse investigation...

Taylor Swift has canceled all of her pending tour dates due to the “unprecedented pandemic.”...

March 1, 2021, No Comments on Denzel Washington’s Movies Ranked, From Worst to Best

Where to buy pampas grass in the UK online

March 1, 2021, No Comments on Where to buy pampas grass in the UK online

March 1, 2021, No Comments on Gal Gadot’s White Givenchy Minidress at the Golden Globes

March 1, 2021, No Comments on Golden Globes 2021: Daniel Kaluuya on mute, animal invasions and too many doors – the seven best moments | Ents & Arts News