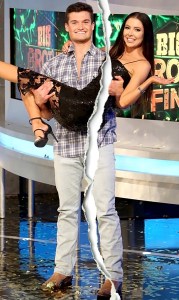 Showmance over. Big Brother alums Jackson Michie and Holly Allen have split after nearly one year together.

‘Big Brother’ Showmances Through the Years

“Life works in crazy ways, and this past year has been no exception. Through the ups, the downs, the highs, and the lows.. there has been one constant through it all and that’s the amazing woman standing next to me. Life has continued to work in ways neither of expected, and sadly life will be taking us in different directions,” Michie, 25, wrote via Instagram on Thursday, June 18. “This isn’t because of bad actions or words, rather, two people who deeply love each other recognizing that a relationship may not be for the best.”

He continued, “I said it on the show and I will say it always, I love her and she will forever hold a special place in my heart. This post is something that neither of us wanted to share, but given the circumstances of our relationship and how things started it only seems appropriate to offer an answer once and for all. Please respect our wishes for privacy on the matter and understand that we are both going through significant life changes and monumental events in our individual lives separate from this. We love our supporters, we love big brother, and we couldn’t be more thankful for everyone along the way who has stood behind us and helped us forward. Day 75 holls. Always.”

Michie and Allen, 32, sparked breakup rumors when he celebrated his birthday without her on Saturday, June 13. Instead, he partied with Big Brother alum Brett Robinson at Encore Beach Club in Las Vegas. Allen also did not wish her then-boyfriend a happy birthday on social media.

The former couple met in June 2019 while competing on the CBS reality competition. The server won the 21st season, while the wine safari guide finished as the runner-up.

In the beginning of the season, Michie had a thing for their housemate Kat Dunn. But as the summer progressed, he moved on with Allen. (Dunn, meanwhile, went on to find love with Nick Maccarone outside of the Big Brother house, but they broke up in April.)

‘Big Brother’ Controversies Through the Years

“I, honestly, severed that [relationship with Kat] because of the game, and then Holly and I started after that,” Michie explained on Big Brother alum Jessica Graf’s podcast, “Now What,” in September 2019. “It wasn’t ever ‘I need to get rid of Kat, so I can be with Holly.’ It was never like that.”

Allen, who previously dated The Bachelorette alum Luke Pell, introduced Michie to her coworkers in October 2019. They met each other’s families over the holiday season and moved into an apartment in the Playa Vista neighborhood of Los Angeles in January.

Hottest Couples Who Fell in Love on Set

“It just seems natural to live together now,” the pair told Us Weekly exclusively at the time. “Being out of the [Big Brother] house, we’ve been basically attached at the hip. We are best friends, communicate well and have so much fun together. Both of our leases were coming to an end and … we both just thought it made sense.”

Michie and Allen were not in a rush to get engaged though, telling Us, “One thing at a time! Right now, we are loving where we are in life and enjoying this journey. We think our relationship will go the distance because we are genuinely best friends. And a friendship came first before we fell in love. Early on, we realized how important we are to each other and made a vow to always be part of each other’s lives — whether it was in a romantic or platonic capacity. Now everything else just comes naturally.”

Listen on Spotify to Watch With Us to hear more about your favorite shows and for the latest TV news!

Us Weekly has affiliate partnerships so we may receive compensation for some links to products...

Vanessa Bryant Speaks Out After Her Mother’s ‘Hurtful’ Claims

Boy or girl? Pregnant Bindi Irwin and Chandler Powell revealed the sex of their upcoming...

Everyone is obsessed with Lululemon leggings. Their loungewear is some of the best on the...

September 22, 2020, No Comments on Saslax Loungewear Pajama Set Is a Dreamer’s Best Friend

September 22, 2020, No Comments on Amber Rose Calls Alexander “A.E.” Edwards Her ‘Husband’ – Did They Secretly Tied The Knot?