AJ McLean Dedicates His DWTS Performance to His Wife Rochelle: "She's My Superhero" 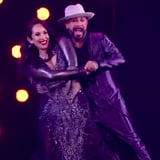 AJ McLean has a lot of love for his wife Rochelle DeAnna McLean. During Dancing With the Stars on Tuesday, the Backstreet Boys singer dedicated his performance to his wife of nearly nine years as he danced to their song “Ain’t That a Kick In The Head” by Dean Martin. Wearing a sleek black suit, McLean seemed to float on air as he moved alongside his partner Cheryl Burke. Of course, one of the sweetest moments was after his performance when he talked about his love for Rochelle and broke down in tears. “She’s my superhero,” he told host Tyra Banks. Aww! Watch the full performance above.

The medical career of neurosurgeon Christopher Duntsch is the stuff of horror stories,...

Image Source: NBC via Giphy On the Oct. 24 episode of Saturday Night Live, we got to see...

Virgin River: What to Expect From Season 2

We have a few ideas of what we might see when season two of Virgin River lands on Netflix...

Who Is Emily Hampshire From Schitt’s Creek Dating?

Though her Schitt’s Creek character, Stevie Budd, has a pretty messy love life,...

Buttery-Soft Lounge Pants Might Be Even Better Than Leggings

October 26, 2020, No Comments on Buttery-Soft Lounge Pants Might Be Even Better Than Leggings