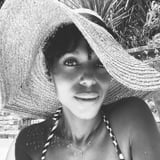 In a movement to uplift women and promote female empowerment, the latest Instagram challenge has celebrities posting black and white selfies as part of the “Challenge Accepted” trend. Kerry Washington, Ciara, and Vanessa Bryant are among the many female stars who have shared photos of themselves “accepting the challenge” and nominating their friends to participate, often paired with the hashtag, #womensupportingwomen. “I am awed by the power of women loving each other and lifting each other up!,” Kerry captioned a black-and-white photo of herself.

Though many celebrity “Challenge Accepted” posts started surfacing over the weekend, it’s still unclear who kicked off the movement, as there are various conflicting theories about its origin. Public relations and influencer marketing manager Cristine Abram told the New York Times that Representative Alexandria Ocasio-Cortez’s speech regarding Representative Ted Yoho’s abrupt comments led to a “spike in social media posts about feminism and female empowerment,” and might have triggered the challenge. The same NYT article also cites a 2016 trend under the same hashtag to spread cancer awareness.

Others, however, including Florence Pugh, have said that the challenge was initiated by Turkish women to bring awareness to femicides and violence against women in the country and to stand in solidarity with the many women who have died recently. Some say the trend took off as a result of the violent death of Pinar Gültekin, a young Turkish woman who was reportedly recently killed.

In addition to its confusing origin, the social trend has been criticized for lacking actionable steps and a clear message. There are currently over four million posts under the hashtag #ChallengeAccepted on Instagram, and it seems that many are posting under the assumption that the challenge is simply meant to empower women. Ahead, see how celebrities have accepted the challenge.

All 16 Hollywood Stars Who Have an EGOT

“Remy the Ratatouille, the rat of all my dreams.” That line has been stuck...