Eric Clapton has announced his first Christmas album Happy Xmas, a collection of seasonal songs that arrives this October.

“I had in my head that these holiday songs could be done with a slight blues tinge, and I started to figure out how to play the blues lines in between the vocals,” Clapton told Billboard.

“I got it down and one of the most identifiable songs on the album, the one that became the foundational style, is ‘Have Yourself a Merry Little Christmas.’”

The 14-track album boasts popular seasonal favorites like “White Christmas” and “Silent Night” alongside lesser-known Christmas songs and one Clapton-penned original, “For Love on Christmas Day.” Clapton’s rendition of the standard “Jingle Bells” also carries the parenthetical “In Memory of Avicii.” 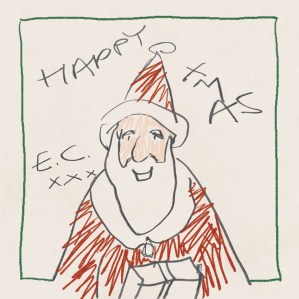 Happy Xmas, due out October 12th, is Clapton’s first official album since 2016’s I Still Do. The guitarist last released his Life in 12 Bars documentary’s soundtrack, featuring his career highlights and unreleased songs, in July.

1. White Christmas
2. Away In A Manger (Once In Royal David’s City)
3. For Love On Christmas Day
4. Everyday Will Be Like A Holiday
5. Christmas Tears
6. Home For The Holidays
7. Jingle Bells (In Memory Of Avicii)
8. Christmas In My Hometown
9. It’s Christmas
10. Sentimental Moments
11. Lonesome Christmas
12. Silent Night
13. Merry Christmas Baby
14. Have Yourself A Merry Little Christmas

Toots & the Maytals Return to Virginia

When Toots Hibbert plays with the...

Mastodon‘s Brent Hinds is selling off items from...

Prince completists rejoice: The majority of the...

Aretha Franklin waived her fee to headline the...

February 21, 2020, No Comments on Inside the Moncler x Rick Owens Customized Tour Bus

Rare Pics Of Diana, Kate & Meghan Before They Were Royals

February 21, 2020, No Comments on Rare Pics Of Diana, Kate & Meghan Before They Were Royals

Bethenny Frankel on ‘RHONY’ Departure: ‘I Wasn’t Leaving Because of Money’

February 21, 2020, No Comments on Bethenny Frankel on ‘RHONY’ Departure: ‘I Wasn’t Leaving Because of Money’